I spent 38 years as a High Voltage Lineman working in an urban environment to restore power after damages from fires, storms, floods and wind. In January 2018, I was sent to Puerto Rico by SET Solutions to help with the restoration after the island’s electrical grid was decimated by two Level 5 hurricanes. The damage was so extreme that three months after the hurricanes swept through, Puerto Rico’s power system was only 20 percent operational.

SET Solutions sent 17 Independent Safety Observers to Puerto Rico per the request of the Army Corp of Engineers, who was overseeing the entire Restoration Project. As an Independent Safety Observer, I worked with the subcontracted lineman on location seven days a week, helping to ensure that they were using best safety practices at all times. The remote mountain villages were the focus of our work and the roads leading there were often inaccessible due to mudslides and other hazards blocking access. The challenge to reach these villages was one that required “out of the box thinking”, determination and teamwork on the part of all involved. Getting the much needed wires, poles and other heavy equipment up those mountains was difficult and potentially dangerous, and safety was always our primary focus.

Mornings and evenings I helped with the oversight of Safety Compliance and Communications between the host utility, the contractor, the subcontractor and the Army Corp. We would assess how the work of the day had gone and discuss ways to make improvements for the next day. There was a palpable sense of camaraderie and respect among the hundreds of linemen, engineers and other support staff, who spent several months of their lives working tirelessly to improve the quality of life for the 3.4 million residents of Puerto Rico. SET Solutions enabled me to be a part of a life altering mission where I was able to work collaboratively to add real value to the island and the people. 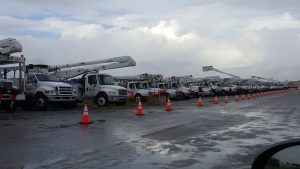 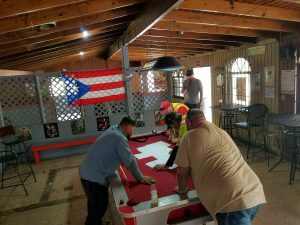